On The Wings Of Butterflies

Ok, so figuring out how to plot is basically a nightmare. Everyone is screaming that you just plot the stuff and then do the writing thing, but then you get halfway through writing and find out that you tied yourself into a knot/left a giant hole/ don’t quite know how to get to where you want to go/have written a totally different story than you intended…

I used to be a pantser (vague idea, maybe some questions I wanted to answer and a ton of gumption) but only for fanfic. So one day I stopped, looked at what I was doing and went “why do I throw myself at this without a plan when I break everything else down in to chunks.”

Eventually I realised that part of it was that I didn’t have any self-belief in my writing. I saw writing as a mysterious art that I just was never going to get the hang off. I didn’t see myself as someone who could write a complete story arc.

Now let’s take a step back, I have always been a storyteller, I’ve written plays, films and TV shows. I’ve published poetry and taken part in oral storytelling competitions. I’ve written backstories and histories for characters and games. Seeing a story through and working with character, plot and series arcs isn’t new to me but I treated writing stories as a separate beast.

So I started to plot.

My plotting happens in segments:

I use this to build pretty much everything I write from official reports to thesis papers to plays to fanfiction.  Again I use a mix of question and response alongside stream of consciousness. for each section I give a central ‘point’ for example the central point of  section 1 is ” how did the Cylon’s destruction of Sentinels in the first war effect the treatment of latter day Sentinels?”, section 2 has “Attack on the Colonies” and so on for each section, sometimes a question I need to explore and other times a key event. 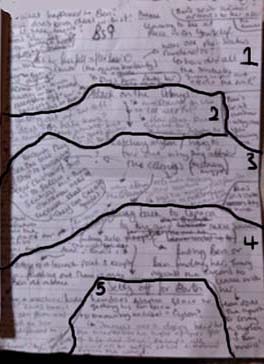 From this document I then research any questions I came up with that I can’t answer off the top of my head or do some world building to make it make sense.

Then I move it all into Scrivener and make it look pretty.

Build a playlist, produce a video and make a banner.